The release of the iPhone 6 is getting people buzzing about the new specs and what to expect from what is arguably the most famous phone in the world.

But, when was the first iPhone released?

We’ll give you a minute… enjoy this pancake bunny while you ponder, and look for the answer below… 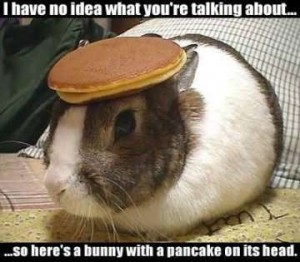 The first generation iPhone was released on June 29, 2007 which is almost 7 years ago as of this posting. Have a great week!